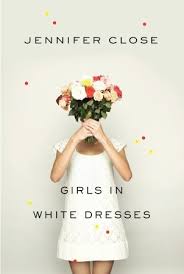 I just finished reading this book. It was ok, not my favorite ever, but not my least favorite.

Basically, this book is about a bunch of girls who are all friends and it follows them from Freshman year of college through their early 30’s. I could relate to some of the characters and things they were going through. Like, all your friends getting married and having babies, graduating college and things not exactly working out the way you had plan, the tight living during the early years of college, the strong friendships I formed during my 20’s, the awkwardness of being set up with people on blind dates.

The complaints I had about this book is that are too many characters and the author never really goes too much in-depth on them. Some girls, who aren’t really the main characters have their own chapter but it’s just one little story that leaves you hanging because she never concludes what happens to them at the end. Also, all their stories and crisis were about the same, so I kept getting confused on who was who. I think it would have been better to only focus on maybe 3 girls and go in more depth. The ending was very bad, I thought. I felt like it just ended with no real conclusion on any of girls. It just stopped. This is the authors first book and I think you can tell.

Like I said, wasn’t horrible, but not great… I would check it out from the library and not buy it though. I would rate it about 3 out of 5 stars.

Read more about it here.

I'm Mandy.. Welcome to my little space of the internet world.

(c) This blog is owned by Amanda Watkins. Everything on my blog is my own unless otherwise stated. I try to credit as best I can, but sometimes I mess up - if you see something please let me know and I will gladly fix it. I believe in giving credit where it is due so please be respectful and if you take anything please source it back! Thanks!
%d bloggers like this: